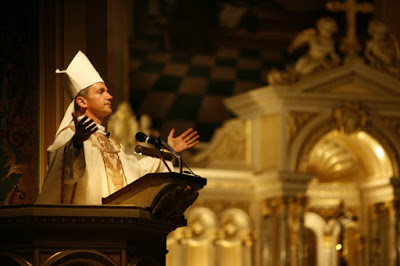 Above is a page from yesterday’s program at the gay marriage exorcism held in Illinois by Bishop Thomas Paprocki.

The head of the Springfield Diocese delivered his remarks to a large crowd of worshippers in the cavernous Cathedral of the Immaculate Conception only blocks from the Capitol, where lawmakers approved the same-sex marriage legislation two weeks ago. “I exorcise you, every unclean sprit, every power of darkness, every incursion of the infernal enemy, every diabolical legion, cohort and faction, in the name and power of our Lord Jesus Christ,” Paprocki said during the hourlong ceremony 200 miles from the bill-signing celebration in Chicago. The exorcism performed is known as a minor one in the pantheon of the practice, said Paprocki, who noted similar renouncements of the devil in the acts of baptisms and confirmations.

Afterward, the bishop said he did not expect people to see instant results, restating a point he made during the service that Hollywood had sensationalized exorcisms. He maintained his remarks “are not meant to demonize anyone, but are intended to call attention to the diabolical influences of the devil that have penetrated our culture, both in the state and in the church.” Yet Paprocki also charged that “politicians responsible for enacting civil same-sex marriage legislation are morally complicit as co-operators in facilitating this grave sin.” “We must pray for forgiveness of these sins and deliverance from this evil which has penetrated our state and our church,” Paprocki said.

A small group of pro-gay Catholics protested outside the cathedral during the exorcism rite.