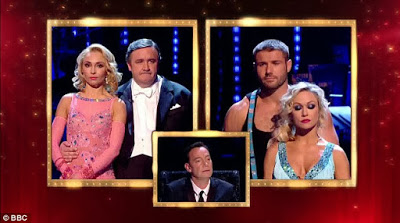 Former England rugby star Ben Cohen has said playing in a World Cup final was easier than taking part in Strictly Come Dancing. The 35-year-old was booted into touch from the ballroom contest on Sunday night after failing to out-tackle actor Mark Benton in the dance-off. The Sun reports that Ben’s tight costumes – and tendency to go completely topless have won him lots of fans. ‘Yes, there have been a few proposals – from men and women,’ he laughed. He also said a highlight of his time on the show was working with his dance partner Kristina. ‘She’s been thrown against a wall, elbowed, stood on, punched – but not on purpose – to make me look like I can dance to a song,’ he said. The former sportsman, who became a crowd favourite for characterful performances, hailed the audience for their support after his final performance. ‘They jumped out of their seats,’ he said. ‘The crowd erupting was a nice reward for effort.’

Here’s Cohen’s shirtless dance from a couple of weeks ago.