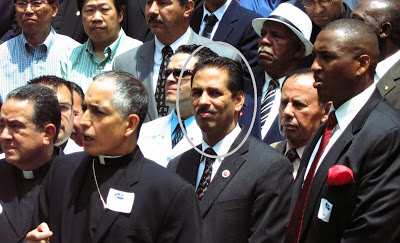 In the photo above you’ll see NYC Councilman Fernando Cabrera (D-Bronx), who is besties with virulently anti-gay state Sen. Ruben Diaz, attending a June 2011 anti-gay marriage rally at City Hall where the red-caped Catholic loons marched in support. Cabrera has bigger things than homo marriage to worry about these days. Via New York Times:

Bronx residents stand to benefit from new jobs, education programs and even free skating under an ambitious plan to redevelop the Kingsbridge Armory into a nine-rink ice center. But now a Bronx councilman is facing questions about whether he sought to benefit from the ice center, too. Councilman Fernando Cabrera has come under scrutiny in the past week after revelations that he demanded that the developer of the ice center, KNIC Partners, pay $100,000 a year for 99 years to a little-known organization, Community Action Unlimited. The organization, which lost its federal tax-exempt status in 2010, has been associated with Mr. Cabrera and his church, New Life Outreach International. Mr. Cabrera’s demand was first reported by The Norwood News. Mr. Cabrera also asked city officials to turn over the former Fordham Library Center to Community Action Unlimited, according to people familiar with the matter.

Lots more juicy details are at the link. (Tipped by JMG reader Duncan)

Previous Infighting Is Funny, Part 94
Next The Robots Have A New Hat