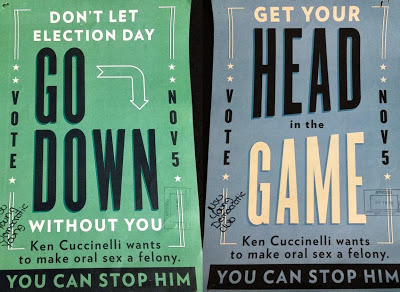 Both posters say at the bottom that they were paid for by “Education Votes, a project of the Democratic Party of Virginia.” They were distributed to other campuses around the state, too, but DPV spokesman Brian Coy said the party has had a change of heart. “While we feel Virginians deserve to know the truth about Ken Cuccinelli’s extreme social agenda, we apologize to those who were offended,” Coy said. “We’re working to remove these posters from the campuses in question and they will not be used again.”

Garren Shipley, a spokesman for the Republican Party of Virginia, called the posters “par for the course” for Virginia Democrats. “Not only does it repeat this thoroughly-debunked Terry McAuliffe falsehood,” Shipley said, “but it manages to do it in an even more crass and tasteless way than before. Mailers and posters like this are what you get when your candidates have no record to run on. The Democratic Party of Virginia should be ashamed. But they’re probably not.”

I would love to have one of these posters.