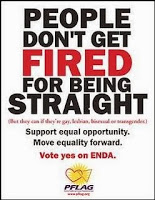 Senate To Hear ENDA Next Week?

According Fred Sainz at the Human Rights Campaign, the Senate will hear ENDA next week. Chris Geidner reports at Buzzfeed:

“Late last night, Leader Reid informed Leader McConnell that the Senate will consider ENDA next week. It’s still unclear as to when Leader Reid will file for cloture,” Sainz said of the bill, which bans sexual orientation and gender identity discrimination in employment for most employers. A McConnell aide said he was unaware of any conversation having happened between the leaders about the plans. Spokespeople with Reid’s office did not provide comment on the plans. [snip] Currently, advocates claim support from 59 senators, including Wednesday’s announcement by Sen. Joe Manchin’s office that the West Virginia Democrat will support the bill and Thursday’s planned swearing-in of Sen.-elect Cory Booker, who backs the bill. All 54 Democrats in the Senate currently co-sponsor or at least have said they will vote for the bill. Four Republicans have signaled support for the legislation through co-sponsorships or votes: Sens. Susan Collins and Mark Kirk co-sponsor the legislation and Sens. Orrin Hatch and Lisa Murkowski voted for the bill in the Senate Judiciary Committee.