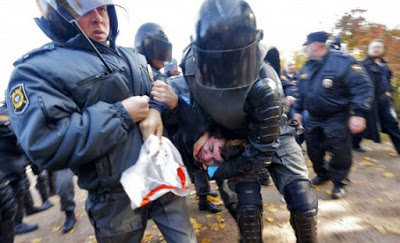 Priests from the Russian Orthodox Church and skinheads clashed with LGBT activists at a St. Petersburg rally yesterday to mark Coming Out Day. There were 67 arrests.

The rally on the Field of Mars (Marsovo Pole) in the city’s downtown was scheduled at 2 p.m., but anti-gay activists arrived at the scene before that time to protest against the event. The activists included Cossacks, Orthodox protesters and members of Russian nationalist organizations. When the LGBT activists arrived, they were met by the anti-gay activists who sang religious songs and did not allow them to get to the venue of the rally. The protesters said they were against holding the event on the Field of Mars, which had a war memorial. Police intervened in the scuffle shortly after the gay rights activists attempted to raise rainbow flags.

One activist told reporters that the police failed to act because the G20 Summit has concluded and the international press has left the city. The headline on one Russian news report about the incident translates as, “With Obama gone, everything is permitted.”