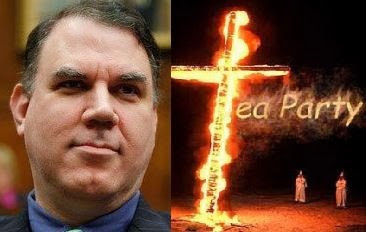 Rep. Alan Grayson this week used the above image to illustrate a fundraising email and outrage is, uh, flaming across the bag-o-sphere.

Jorge Bonilla, the Republican challenger to Alan Grayson (D-FL), told Breitbart News on Tuesday that Grayson’s use of a burning cross, a reference to the Ku Klux Klan, in an effort to fundraise off an anti-Tea Party email is unseemly. “The depiction of burning crosses in Congressman Alan Grayson’s most recent fundraising ask is despicable and needlessly hurtful to the many millions of families that still deal with the wounds of racial prejudice,” Bonilla said in an email. “Such times as these call for our elected officials to be uniters.”

“Having been born and raised in Georgia, having parents that were born and raised during the 20s and 30s, I remember growing up and seeing that burning cross on a clear night atop of Stone Mountain so that everyone could see it across Atlanta,” West said. “This is despicable. This is demeaning. This is disgusting,” he continued. “We all know that Alan Grayson is pretty much a sensationalist and he can continue to say things that are over the top.” Then he wondered where the civil rights leaders were during this. “But my concern is where is the NAACP and Ben Jealous? Where is the National Urban League and Marc Morial?” he asked.

Grayson has refused to apologize, saying, “If the hood fits, wear it.”

While Tea Party members have been caught using racially-inflammatory language and imagery on multiple occasions, Grayson offered specific examples in a separate interview with the Sentinel. “When the president visited my home of Orlando, Tea Party protesters shouted ‘Kenyan Go Home,’” Grayson told the Sentinel. “Other examples include Tea Party chants of ‘Bye Bye Blackbird’ and Tea Party posters saying ‘Obama’s plan: White Slavery.’ One could go on and on, because there is overwhelming evidence that the Tea Party is the home of bigotry and discrimination in America today, just as the KKK was for an earlier generation.”