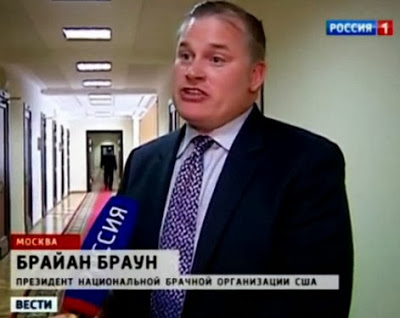 Right Wing Watch reports that at the invitation of Russia’s legislature, NOM president Brian Brown traveled there with a group of far-right French Catholic anti-gay activists to collaborate on the bill that bans gay couples from adopting.  The DUMA passed the bill five days after Brown’s visit.

On June 13, 2013, just days after the Russian Duma passed laws banning on gay “propaganda” and actions that “offend religious feelings,” a delegation of five French Catholic anti-gay activists –at least one with ties to the far-right Front National party — traveled to Moscow at the invitation of the Duma committee on family, women and children to discuss, among other issues, Russia’s plans to tighten its ban on adoption by same-sex couples abroad. Joining them was one of the most well-known figures in the American anti-gay movement, National Organization For Marriage president Brian Brown. Brown had worked closely with the French anti-gay movement in its protests of the country’s marriage equality law, traveling to Paris to demonstrate against the law and signing onto an email to members of the Collectif Famille Mariage, one of the most prominent groups working to oppose marriage equality in France.

More from the report:

Le Figaro notes that elected officials at the front of the French anti-marriage movement did not respond to the Duma’s invitation to attend the meeting for fear of being “associated with a campaign of homophobia directed by Moscow” but that the name of the far-right Le Pen family “was mentioned several times” at the event. According to Russian news reports, the French activists and Brown attended two events in Moscow. One was a joint meeting on changes in international adoption laws with the Duma’s committee on foreign affairs and its committee on family, women and children – whose chair, Yelena Mizulina, authored the ban on gay “propaganda” and the adoption bill.

The other event was a roundtable discussion on “Traditional Values: The Future of the European Peoples,” hosted by the St. Basil the Great Foundation – a Catholic group run by Konstantin Malofeev, the head of a private equity group and spirited anti-gay activist – and also sponsored by the Duma’s family committee, the right-wing Center for Social-Conservative Policy, and a new multi-party group of Russian MPs formed, with approval of the Russian Orthodox Church, to “protect traditional Christian values” and fight “aggressive liberalism” inreaction to Pussy Riot’s protests. Among the measures pushed by the group was the new law imposing jail time for “insulting religious feelings.”

Right Wing Watch notes that NOM has never announced Brown’s trip to Russia and has refused their request to comment publicly. As you may recall and as RWW notes in their report, earlier this year Brown appeared at one of the massive anti-gay rallies staged in Paris by Manif Pour Tous, which by then had been taken over by violent factions from France’s far-right and neo-Nazi groups, as well as a group that demands a Catholic theocracy for France.

It seems obvious that Brown’s humiliating defeat in France and the friends he made in their failed and often violent anti-gay movement spurred his invitation to take part in Russia’s pogrom against its gay citizens. It’s not yet known if Brown also collaborated on the pending bill that authorizes the Russian government to seize the children of gay parents. (And still, NOM is not listed as a hate group by the SPLC.) Please hit the top link in this post and read the full and extensive report by Right Wing Watch.

VIDEO: Below is a brief appearance by Brown from a Russia television station covering the meetings.