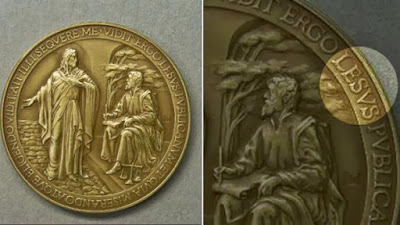 The Vatican has suspended sales of a papal medal which heralds the world’s savior, Lesus.

Four of the medals, which went on sale Tuesday, had already been sold. It has been suggested that because of the error these could become valuable. The medals were made by the Italian State Mint and should have carried the inscription: “Vidit ergo Jesus publicanum, et quia miserando atque eligendo vidit, ait illi, ‘Sequere me.'” This roughly translates as, “Jesus therefore sees the tax collector, and since he sees by having mercy and by choosing, he says to him, ‘follow me.'” Instead, someone named “Lesus” saw the tax collector.