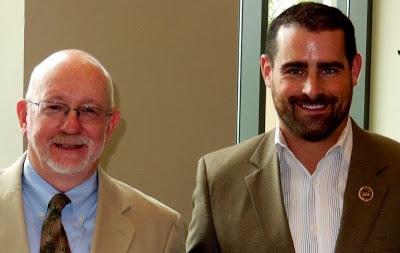 PENNSYLVANIA: Sims & McCarter Call On Gov. Corbett To Give Up Like Christie

“Once again, we’re seeing that even conservative Republicans are realizing that all Americans deserve equal rights,” Sims said. “Unfortunately, here in Pennsylvania, where LGBT Pennsylvanians lack even a single LGBT civil right, some members of the Republican Party would sooner be the Republicans of 1955 rather than 2025. It’s unconscionable that Pennsylvanians who get married out of state can still be fired for putting a wedding photo on their desks.”

“It’s a black eye on the state of Pennsylvania that nearly all of our neighboring states have decided to enter the 21st century and grant equality to all their citizens, yet we still are stuck in the Stone Age,” McCarter said. “Plain and simple, the fact that Pennsylvanians can now cross a border and be granted more rights than they currently have in their own state is a problem that needs to be addressed and it needs to be addressed now.”

PREVIOUSLY ON JMG: Two weeks ago Corbett filed a brief claiming that he is exempt from the marriage suit filed in federal court by the ACLU. Three days earlier he compared same-sex marriage to incest during an interview with a Harrisburg television station. In early September he hired an expensive outside firm to defend the state against the ACLU’s case after state Attorney General Kathleen Kane refused to take the case. In August he filed an ultimately successful suit to halt the issuing of marriage licenses by Montgomery County Clerk Bruce Hanes.