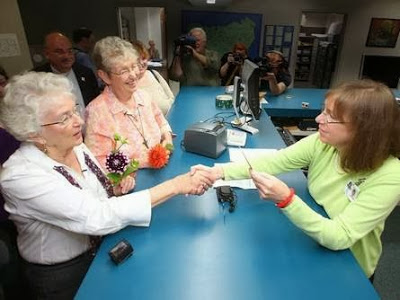 A lesbian couple together for 40 years yesterday applied for a marriage license in North Carolina’s Henderson County.

“Carole and I are here today to apply for a marriage license,” said 79-year-old Mary Burson, “because we love each other, we’ve been together for 40 years…we’ve raised eight children together and we want to make the commitment that our brothers and sisters that are heterosexual can make.” Burson and her partner, Carole Kaiser, 79, hoped Register of Deeds Nedra Moles would join a county clerk in Pennsylvania who has issued 174 marriage licenses to gay couples, even though that state — like North Carolina — prohibits same-sex unions. “Well, consider is about all I can do, because you both know that according to North Carolina law, I cannot issue the marriage license (to same-sex couples),” Moles said. “I’ve made you a copy of the N.C. General Statute, in case you would like to look at it, but I cannot do this today. So, I must turn you down.”

Seventy members of the couple’s church waited outside the courthouse to cheer their attempt, which was sponsored by the Campaign For Southern Equality. (Tipped by JMG reader Aaron)