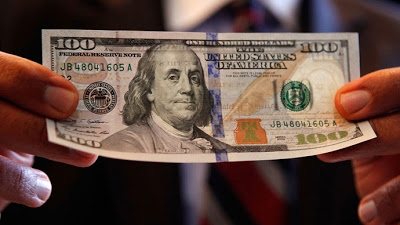 $3.5B worth of the redesigned $100 bill is being distributed to banks today.

The bill redesign, the first for the $100 bill since March 1996, will still have Benjamin Franklin on the front and Philadelphia’s Independence Hall on the back. It will also have a number of new features that will definitely turn heads. There is a disappearing Liberty Bell in an ink well and a bright blue three-dimensional security ribbon with images that move in the opposite direction from the way the bill is being tilted. “The 3-D security ribbon is magic. It is made up of hundreds of thousands of micro-lenses in each note,” said Larry Felix, the director of the Bureau of Engraving and Printing. “This is the most complex note the United States has ever produced.” The $100 bill is the last bill to get a make-over in a process that began in 2003 with the $20 bill. The government redesigned the greenbacks with subtle colors and other security features to make it harder for counterfeiters. The $100 bill, which is the most commonly counterfeited note outside of the United States, was redesigned with even more complex security features.

Previous Quote Of The Day – Rev. Gary Hall
Next VA Poll: Cooch Slips To 9 Points Behind