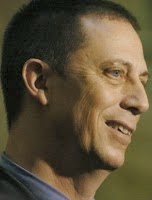 You may recall that last year, after he drunkenly crashed his boat, injuring six people (including children), Maryland state Rep. Don Dwyer blamed his alcoholism on being upset about the passage of gay marriage. And he went out and got yet another DUI, this time in his car. You’d think that the sentence for two DUIs would be more than 60 days, but you’d be wrong.

Del. Don Dwyer Jr. of Anne Arundel County was sentenced Friday to 60 days in jail — to be served on weekends — on charges of drinking and boating and drunken driving in separate incidents. In issuing the sentence Judge Emory Plitt, a retired Harford County judge who was brought in to hear Dwyer’s cases in Anne Arundel Circuit Court, admonished the delegate, saying public servants must be held to a high standard for their actions. “We hold ourselves out to the public as their representatives,” Plitt said. The judge said he had no doubt about Dwyer’s guilt in both cases. “He was driving both times. He was drinking both times. Let’s just face the facts,” Plitt said. Plitt sentenced Dwyer, 55, to one year in jail, with all but 30 days suspended, for operating a boat under the influence. He also sentenced him to another 30 days for a charge of driving a vehicle while impaired, a charge Dwyer pleaded guilty to Friday morning.

Sixty days is a “higher standard”?

RELATED: In 2011 Dwyer sat next to Maggie Gallagher during Maryland’s marriage equality hearings, telling the committee that any state delegate that testified in favor of the bill should be “arrested for perjury” because saying that gay people deserve equality “is a lie and they know it.” During the hearings Dwyer presented documents from the SPLC-certified hate group, MassResistance, claiming that gay activists want to introduce sadomasochism to grade school children. Dwyer also recorded an anti-gay robocall for NOM.

Previous Today’s Lie From Fox News
Next The Original Teabagger