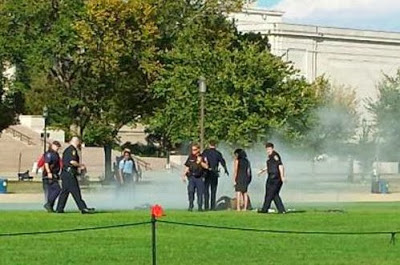 Man Sets Himself On Fire On National Mall

Capitol Hill was rocked by another bizarre incident late this afternoon when a man set himself on fire on the National Mall. The Associated Press reports:

The reason for the self-immolation was not immediately clear and the man’s identity was not disclosed. But it occurred in public view, on a central national gathering place, in a city still rattled by a mass shooting last month and a high-speed car chase outside the U.S. Capitol on Thursday that ended with a woman being shot dead by police. The man on the Mall suffered life-threatening injuries and was airlifted to the hospital, said District of Columbia fire department spokesman Tim Wilson. He was standing by himself in the center portion of the Mall when he emptied the contents of a red gasoline can on himself and set himself on fire moments later, said Katy Scheflen, who witnessed it as she walked across the area. Police say they responded around 4:20 p.m. Friday. Scheflen said passing joggers took off their shirts in an effort to help douse the flames, and the man was clearly alive as the fire spread. A police department spokesman said he was conscious and breathing at the scene. MedStar Washington Hospital Center tweeted that the man was taken there and he was in critical condition.

The man apparently had no sign and said nothing intelligible before setting himself on fire. Despite that, commenters on right wing sites are buzzing that this was some kind of anti-Obama protest and some are pointing out it was a 2011 self-immolation in Tunisia that helped spawn the Arab Spring uprisings.