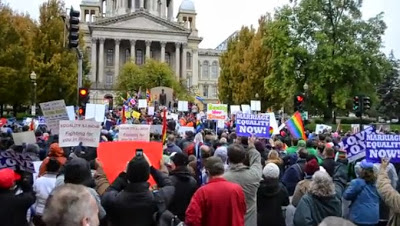 The Chicago Tribune reports on yesterday’s March On Springfield.

Gay marriage supporters flocked to the Capitol grounds by the busload Tuesday, waving rainbow-colored flags and wearing rain-soaked bridal veils to pressure lawmakers to make Illinois the 15th state to legalize same-sex unions. The show of force that police estimated at 3,000 people ran up against the political reality that there’s little indication the Illinois House is any closer to approving a gay marriage bill than it was before a summer of lobbying efforts. Lawmakers are waiting to see whether they face difficult re-election efforts, and religious groups opposed to the bill plan their own rally Wednesday.

The situation has created a sharp divide among advocates who are split on how sponsoring Rep. Greg Harris should proceed. On one side are those demanding that Harris call the bill even if the support isn’t there, arguing that lawmakers should be held accountable while also making it clear who should be targeted as potential backers. On the other side are those who contend that pragmatic politics should not be ignored, contending a failed vote would set back efforts to get the bill passed and send a bad message.The tension was on display through the day, as some in the crowd shouted “Call the vote” while Harris spoke.