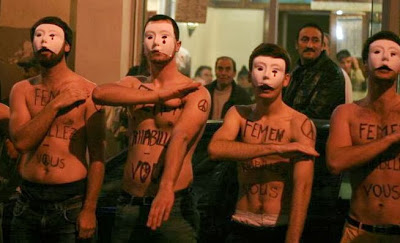 The Hommen: Young buff male anti-gay extremists who protest France’s gay marriage law by staging homoerotic half-nude protests. The Femen: Young buff female Ukrainian activists who denounce the oppression of women and gays by staging topless protests. And finally they meet when the Hommen show up outside the Femen’s Paris office to chant slogans and throw brassieres at the windows. Note that two of the Femen taunted the Hommen boys back by, you guessed it, hanging out of the windows topless. (Regarding the photo, I’m told that the Hommen are doing some kind of Christian fascist salute.)