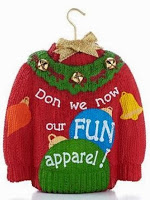 Hallmark doesn’t want anybody to accidentally have a gay Christmas. Via Huffington Post:

One of Hallmark’s 2013 Keepsake ornaments is intended as a colorful homage to “Deck the Halls,” but the featured line contains a notable change in the traditional carol’s lyrics. A spokeswoman for Hallmark said the line was intentionally changed to prevent misinterpretation by holiday shoppers. “When the lyrics to ‘Deck the Halls’ were translated from Gaelic and published in English back in the 1800s, the word ‘gay’ meant festive or merry,” Kristi Ernsting told The Huffington Post in an email. “Today it has multiple meanings … the trend of wearing festively decorated Christmas sweaters to parties is all about fun, and this ornament is intended to play into that, so the planning team decided to say what we meant: ‘fun.'”

RELATED: In 2009 Hallmark introduced gay wedding cards much to the anguished screams of hate groups.

Previous Virgin America’s New In-Flight Safety Video Is A Pop/Dance Extravaganza
Next Bryan Fischer: Being Gay Is A Choice But I Did NOT Choose To Be Straight