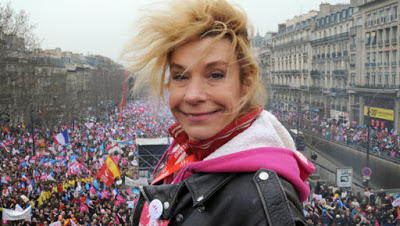 Frigide Barjot, the former leader of Manif Pour Tous, the anti-gay group that staged massive rallies across France, has been ordered out of her public housing in Paris.

Frigide Barjot, is to be evicted from the 173-square-metre flat in central Paris that she and her husband rent from the city council. A court ruled that they illegally sublet the apartment to a business run by Barjot’s husband, Bruno Tellenne. The court found that the couple received rent from a company called Jalons, set up by Tellenne, also known as Basil de Koch, to publish humorous journals. The couple have four months to leave their two-storey home, which consists of two apartments knocked together, thanks to a ban on evictions during the winter but must also pay 1,500 euros to the council.

The couple claims that the eviction is retribution for their anti-gay activism, but a local city council member notes that they own several properties in France and had no business being in public housing in the first place. Le Parisien reports that Barjot owns a house in St. Tropez, a four bedroom apartment in Paris’ 15th arrondissement, and a home on the English Channel. (Tipped by JMG reader Elroy)