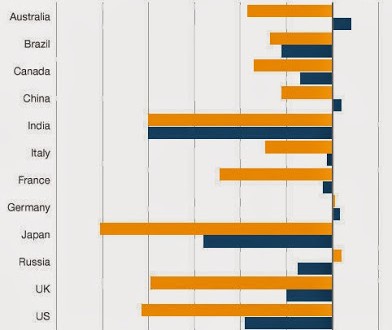 Taken out of context, the numbers are staggering. The US has a total debt pile of almost $17 trillion (£10.6 trillion), which is expected to rise to almost $23tn in the next five years. Japan is not far behind, with current debts totalling $11.5tn. By any standards, these are big, big numbers. But context is needed – after all, debt is not necessarily a problem if you have the income to cover it. That is why the two most common measures used to gauge a nation’s indebtedness are: total debt, as expressed as a percentage of total economic output (GDP), and budget deficit, the amount by which a government’s expenses exceed its income, expressed as a percentage of GDP.