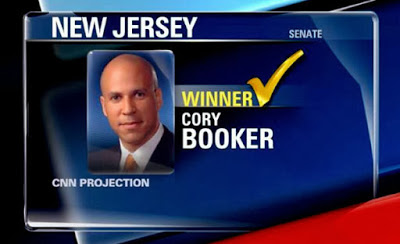 The Associated Press has declared Cory Booker to have won the US Senate race in New Jersey.

When Booker is sworn in, the Democratic Caucus will once again hold a 55-45 advantage over the GOP Conference. Booker will fill the seat once held by Frank Lautenberg, a long-serving Democratic senator who died in June. Gov. Chris Christie appointed fellow Republican Jeff Chiesa to be Lautenberg’s interim replacement.

Booker, 44, will become the chamber’s second African American member along with Sen. Tim Scott (R-S.C.). The Democrat will enter the Senate having already achieved celebrity status. A regular on cable news programs and Sunday morning news shows with more than 1.4 million followers on Twitter, Booker has cultivated a profile that extends well beyond New Jersey.

He could fill a void in the Senate. While there are a handful of freshman Republican senators with growing national profiles like Sens. Ted Cruz (Tex.), Rand Paul (Ky.) and Marco Rubio (Fla.), there is a dearth of new Democratic senators eager for a spotlight.

All those carpetbagging Tea People and all that last minute money and robocalling from NOM was wasted! And a single perfect tear falls from our eye…

Previous Chris Christie: If I Had A Gay Child, I’d Say You Have No Right To Get Married
Next The Shutdown Is Over