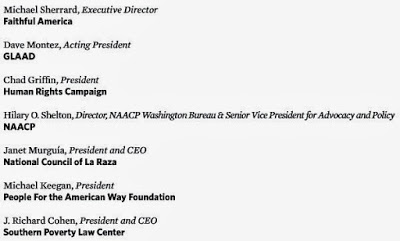 The above groups have signed on to a Southern Poverty Law Center letter which asks members of Congress not to attend the Family Research Council’s Values Voter Summit. Via press release:

“Public officials need to know the real ‘values’ they’re endorsing when they attend the Values Voter Summit,” said Heidi Beirich, director of the Southern Poverty Law Center’s Intelligence Project. “Offensive and bigoted lies are not magically transformed into the truth just because a group with the word ‘family’ in its name keeps repeating them.” The letter describes how the FRC has repeatedly portrayed gay men and lesbians as sick, evil, incestuous, violent, perverted and a threat to the nation. It points out that FRC President Tony Perkins has gone so far as to describe the “It Gets Better” campaign – an effort to give LGBT students hope for a better tomorrow – as “disgusting” and part of a “concerted effort” to “recruit” children into the gay “lifestyle.” The letter also points out that Bryan Fischer, AFA spokesman and director of issue analysis, has blamed gay men for the Holocaust and the Nazi Party. “Homosexuality gave us Adolph Hitler, and homosexuals in the military gave us the Brown Shirts, the Nazi war machine and 6 million dead Jews,” Fischer has written.

Previous TODAY: SiriusXM At 3:30PM
Next Quote Of The Day – Antonin Scalia