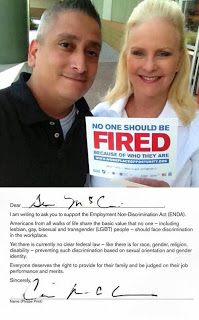 After being collared by an HRC staffer in an Arizona outlet of Staples, Cindy McCain signed a petition that asks her husband to endorse ENDA. The Washington Post reports:

Call it a bold canvassing move that paid off: An organizer for the Human Rights Campaign asked Sen. John McCain’s (R-Ariz.) wife Cindy to sign a postcard Thursday urging the senator to back legislation barring workplace discrimination on the basis of sexual orientation and gender identity. She signed it. The senator has never supported the Employment Non-Discrimination Act, which passed a Senate committee in July and could come to the floor for a vote soon. A bipartisan coalition has dispatched field organizers in seven states across the country to mobilize constituents on behalf of the bill, and HRC has collected “tens of thousands of postcards” as part of the effort, according to HRC spokesman Michael Cole-Schwartz.

When asked about the petition signing, a spokesman for Sen. McCain had a noncommittal response: “Senator McCain enjoys and appreciates having discussions on the
important issues of the day with all the members of his family, and he
respects their views.”