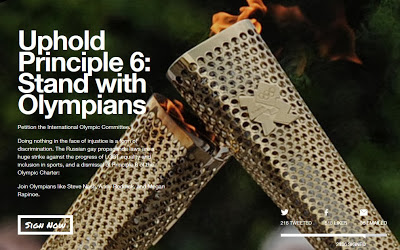 Athlete Ally and All Out have joined forces to urge the International Olympic Committee to uphold its own Principle 6, which bans discrimination at the Olympic Games. The groups intend to make Principle 6 into a method of denouncing Russia’s anti-gay laws without actually risking the arrests of attendees or the medals of supporting athletes at the Sochi Games. Frank Bruni explains at the New York Times:

Athlete Ally, working with a company called the Idea Brand and the professional football player Brendon Ayanbadejo, came up with and developed the notion of using the very name of that clause, along with a logo or logos that allude to it, as a rebuke of Russia’s laws and a method for athletes and fans to express their convictions. The symbol and the syllables P6, perhaps worn as a sticker, perhaps woven into clothing, could evolve into something along the lines of a Livestrong bracelet: a ubiquitous motif that doesn’t spell out a whole philosophy but has an unmistakable meaning and message. [snip] It’s an attempt to take full advantage of the world’s attention to the Winter Games without putting athletes at risk of censure. Maybe they hold up six fingers. Maybe their outfits include something with a P6 logo, several designs for which are being considered.

Read more about the Principle 6 campaign at the Athlete Ally site. Their petition is at the link.  Samples of the proposed Principle 6 logos are at the Times link.

Previous The Roots & Miley Cyrus – We Can’t Stop
Next Crazy Eyes: Obama Is A Dictator Thug