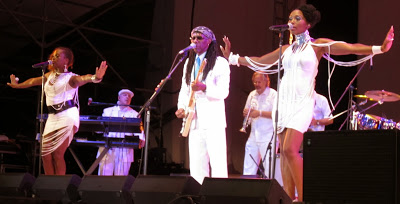 The list of 2014 nominees for the Rock & Roll Hall Of Fame was announced today. On the list for the eighth time are disco legends Chic, who remain fronted by mega-producer Nile Rodgers (Madonna, David Bowie, Duran Duran.) I took the photo above at Chic’s free show at Lincoln Center last summer.

Artists become eligible 25 years after their first US release.

NOTE: There may some controversy about the nomination of Cat Stevens, who in 1977 converted to Islam, changed his name to Yusaf Islam, and who (some claim) supported the fatwa calling for the execution of Satanic Verses author Salman Rushdie. He has, however, won several major awards for promoting peace.

RELATED: Donna Summer was inducted earlier this year after five consecutive nominations. I took the photos below at the Rock Hall Of Fame when I was in Cleveland a couple of weeks ago. That’s the waitress costume Summer wore for the She Works Hard For The Money video. To the right is a copy of one of her early fan club newsletters, which was titled Rumor Has It, after her hit single from 1977’s Once Upon A Time.

Previous Sarah Palin Has The Shutdown Sadz
Next Chris Christie: If I Had A Gay Child, I’d Say You Have No Right To Get Married