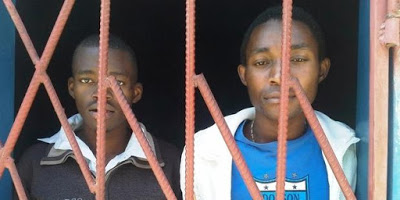 ZAMBIA: Two Men Face 15 Years In Prison For “Acts Against The Order Of Nature”

Two Zambian men are about to go on trial for committing homosexual acts. Amnesty International reports:

Philip Mubiana, a hair dresser and James Mwape, a brick layer, were charged with committing acts “against the order of nature”. They have been in custody for more than four months after being denied bail. If convicted they face a minimum of 15 years in jail. Laws prohibiting consensual, private, same-sex sexual activity criminalise the legitimate exercise of the rights to freedom of expression, conscience, expression and privacy. These are protected in numerous treaties ratified by Zambia including the International Covenant on Civil and Political Rights and the African Charter on Human and People’s Rights.

It’s also a crime in Zambia to advocate for LGBT rights and in a separate case, a local activist is under arrest for giving an interview with the local press.

RELATED: Zambia, which gained independence from Britain in 1964, declares itself to be a Christian nation in its constitution. According to the Pew Forum, 97% of the population identifies as Christian.