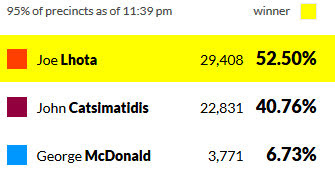 During his victory speech, former MTA head Joe Lhota crowed and crowed as if he didn’t just take only ten percent of the votes won by Bill De Blasio, who competed in a hotly contested ten-person field. During his speech Lhota reaffirmed his support for stop-and-frisk, declaring, “I won’t handcuff our police officers.” But he will handcuff thousands of innocent black and Latino men.