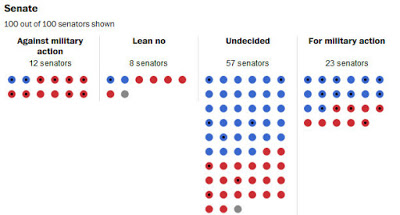 Where Does Congress Stand On Syria?

The Washington Post has created an interactive graph which notes the known positions of Congress members on a possible US strike on Syria. So far only two Senate Democrats have said that they oppose US intervention: Sen. Chris Murphy (CT) and Sen. Tom Udall (NM). Perhaps the most notable House Democrat to oppose intervention so far is Rep. Alan Grayson (FL), who has been very active on social media with his objections. Listed as “leaning no” are openly gay House members Rep. Mark Pocan (WI) and Rep. David Cicilline (RI).  On Saturday, openly gay Sen. Tammy Baldwin (WI) issued this statement:

“I am pleased that the President is seeking Congressional authorization for any potential strike in Syria. I still believe there must be a strong and convincing case made to the American people and we must work to build an international coalition before we lead or join any military response. My judgment on any military action in response to the Assad regime’s use of chemical weapons will be based on whether clear, focused and achievable objectives and goals are set.”