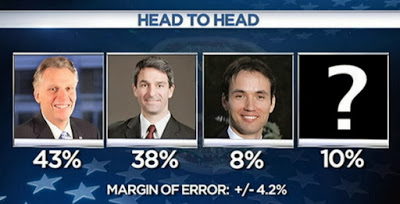 Virginia Attorney General Ken “Sodomy” Cuccinelli has slipped to five points behind Democrat Terry McAuliffe in that state’s gubernatorial race. The latest result is nearly a reversal of the positions the two candidates held at the launch of the campaign. Right wing sites are wailing that Libertarian candidate Robert Sarvis may be Nader-ing the election.

Sarvis is the wild card in the race and presents a potential threat to Cuccinelli. Sarvis’ 8 percent is in line with a Quinnipiac poll out last week that had him at 7 percent. Sarvis gets 15 percent of independents, 5 percent of Republicans, and just 2 percent of Democrats. (McAuliffe and Cuccinelli split independents, with McAuliffe holding a statistically insignificant 36-34 percent edge.) “If this ends up very close, there is a factor there,” Miringoff said. Sarvis may be something of an outlet for disaffected Republican voters who are calling themselves independents.

Cuccinelli is reportedly mulling airing a 30-minute campaign ad close to election day. Both Cuccinelli and McAuliffe are seeing soaring “unfavorable” numbers due to a deluge of mud-slinging ads. Cuccinelli’s unfavorable number climbed 20 points over the summer.

Previous New Ad From Chris Christie
Next Photo Of The Day