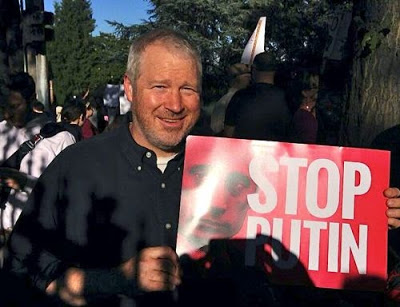 Two weeks ago hundreds of activists including Dan Savage staged a protest in front of the Russian consulate in Seattle. (Slideshow here.) Also in attendance was Seattle Mayor Mike McGinn (above) and his Democrat mayoral opponent, openly gay state Sen. Ed Murray.  Dominick Holden reports on the fallout:

One of four Russian consul generals living in the United States sent an agitated letter to Seattle mayor Mike McGinn asking why he recently joined a “misleading” protest against Russia’s anti-LGBT laws and the upswing in anti-gay violence there. Andrey Yushmanov says he was “unpleasantly surprised” by seeing online photos of the mayor holding a “Stop Putin” sign in front of Yushmanov’s gated Madison Park mansion. “I would appreciate it if you could clarify whether your support of the protesters reflects the official position on the authorities of Seattle?” Yushmanov pressed. Yushmanov argued that gays are treated fairly with a “spirit of tolerance” under Russia’s constitution, which bans discrimination, and, as such, the protest’s portrayal of Russia being intolerant towards gay people “is simply not true.” The anti-propaganda laws are purportedly designed to help kids. “The goal of public policy toward children is to protect them from factors that can negatively affect their physical, intellectual, mental, spiritual, and moral development,” Yushmanov said in defense of the law, adding that “punishing a country for having a different opinion is a form of discrimination in itself.”

McGinn’s office says that he only speaks for himself and not for the city of Seattle as the City Council has refused to take a position on Russia’s anti-gay laws. Dan Savage has an opinion about that.