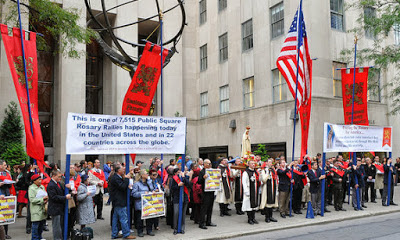 America Needs Fatima is a side project of the red-caped Catholic loons at Tradition Values & Property. And they say they will hold 10,000 “rosary rallies” against same-sex marriage. Via press release:

America Needs Fatima coordinated 9,077 Rosary Rallies last year. This year, the goal is 10,000 Public Square Rosary Rallies nationwide and the target date is Saturday, October 12, at noon, local time. At the group’s campaign headquarters in Rossville, Kansas, national coordinator Francis Slobodnik announced that they had crossed the threshold of 9,800 Rosary Rally Captains and are fast reaching their goal of 10,000 rallies. “We’re almost at our goal of 10,000 rosary rallies. Rally captains are really excited and momentum is picking up fast,” noted Mr. Slobodnik. “Catholics will proclaim their faith publicly, pray for America, and send a strong pro-life and pro-family message in the public square.”

There are still signs of Catholic militancy in America. This can be seen in the continuing growth of the pro-life movement and in the rejection of blasphemy and socialism. However, there is still much work to be done. Those who seek to remove God and His holy law from our society fight on. They do not stop. They are totally committed to their cause and are insatiable for victory. The institution of the family is weakened by impure customs and threatened by the legalization of homosexual “marriage;” the sexual revolution pervades popular culture especially in television, media, movies, and the Internet and is almost co-natural with our culture now. At Fatima in 1917, Our Lady made it very clear that the Rosary is the supernatural solution to our earthly problems. Father Pavlicek also saw this as a solution and promoted a national Rosary Crusade that saved Austria from Communism. Just like in Austria, the Rosary can save America.