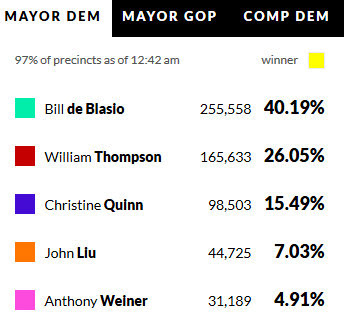 Democratic mayoral leader Bill de Blasio appears to have very narrowly avoided a runoff, having eked out a scant 0.19% more votes than the 40% requirement at this writing. But with 97%  of the precincts having reported, the city’s Board Of Elections announced that it will now count absentee ballots and the paper ballots used yesterday for malfunctioning machines. A final count is not expected until Monday, possibly later.