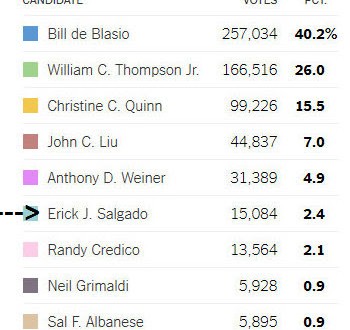 In a transparent bit of payback back in June, NOM endorsed the New York City mayoral candidacy of crackpot Rev. Erick Salgado, who helped organize NOM’s anti-gay marriage hate march in the Bronx two years ago. From Brian Brown’s press release that day: “There are millions of people in New York City who support traditional marriage and deserve to have their voices heard. Rev. Erick Salgado is not only that voice, but is a true leader who has a vision for New York that is based on conservative values. Erick Salgado is the candidate who will work to restore marriage in New York.” Take a look at the results above and see the value of a NOM endorsement in New York City.