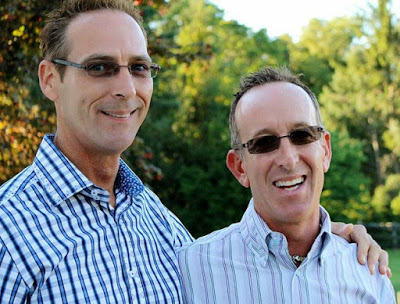 Police are seeking a suspect in the murder of noted equestrian Ross Reisner (above right), who was shot through the window of his Long Island home on Tuesday as he chatted with his partner of 24 years (above left).

Ross Reisner, 50, and Kevin Murray were sitting on a leather couch in the living room at their house in Setauket, L.I., at about 8:45 p.m. Tuesday when the shots were fired. Detectives were seeking to question a longtime friend about the slaying, Reisner’s grieving family told the Daily News. “He was an old friend and now this craziness,” Ian Reisner, the slain man’s brother, said as he sat shiva at his mother’s midtown Manhattan apartment. “There was something weird going on, some bad blood.” The friend had known Reisner for over 20 years and had a beef with him, Reisner’s brother said. “This was not Dad’s pistol under the pillow,” he said of the murder weapon. “This was a high-caliber weapon.” A police source confirmed detectives are seeking to talk to a disgruntled friend. Murray, 50, was grazed in the hail of bullets.

Reisner was a trainer of competitive equestrians and his riders will compete in the national finals next month.