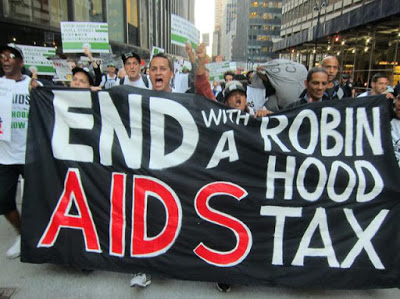 Yesterday about a thousand activists marched on the United Nations, demanding the creation of a so-called “Robin Hood Tax” on Wall Street and financial institutions around the world. Forbes posted a press release:

To commemorate the 2nd Anniversary of Occupy Wall Street, the Robin Hood tax coalition that consists of two hundred million supporters around the world including Occupy Wall Street, Bill Gates, Warren Buffet, UN Secretary General Ban Ki-Moon, The Vatican, The AFL-CIO, Lawrence Summers, Nancy Pelosi, Nobel Prize Laureates Desmond Tutu, Al Gore, Joseph Stigliz and Paul Krugman will rally to support H.R. 1579, the Inclusive Prosperity Act, a financial transaction tax of 0.5% that will raise hundreds of billions of dollars a year that puts people before profit and helps stabilize the financial markets. Dozens of major economies have already implemented this tax. 11 countries including Germany and France will begin to implement the tax on January 1.

This small tax of less than ½ of 1% on Wall Street transactions can generate hundreds of billions of dollars each year in the US alone. Enough to protect American schools, housing, local governments and hospitals. Enough to pay for lifesaving AIDS medicines. Enough to support people and communities around the world – and deal with the climate challenges we’re facing. It won’t affect ordinary Americans, their personal savings, or every day consumer activity, such as ATMs or debit cards. It’s easy to enforce and tough to evade. This is a tax on Wall Street, which created the greatest economic crisis in our nation, and globally, since the Great Depression. The same people who have returned to record profits and bonuses while ordinary Americans, the 99%, continue to pay the price of their crisis.

Gothamist has posted a slideshow from yesterday and notes that among those arrested was openly gay New York state Sen. Bray Hoylman, seen below.

Previous Hillary Clinton: Stand Up For Gay Rights
Next Headline Of The Day