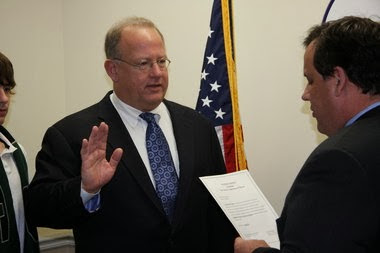 DelVecchio, a Democrat, said he will perform the state’s first legal gay marriage ceremony for Beth Asaro and Joanne Schailey at midnight three weeks from today, as long as a judge doesn’t grant a stay of the Sept. 27 ruling. A handful of couples has already expressed interest in weddings, he said. Lambertville, across the Delaware River from New Hope, Pennsylvania, has a large gay population. “This is just a continuation of the first civil union,” DelVecchio, 56, said today in an interview. “If a stay is not granted on the 21st, we’re going to move forward with this.” Superior Court Judge Mary Jacobson ruled last week in Trenton that she “will order the state to permit any and all same-sex marriages.” Unless the ruling is blocked, it would take effect Oct. 21, making New Jersey the 14th state to allow gay marriages along with the District of Columbia.

Christie’s promised appeal has not yet been filed.