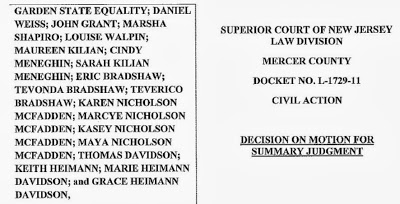 In a ruling that Gov. Chris Christie has vowed to appeal, a New Jersey Superior Court judge ruled this afternoon that the state must allow same-sex couples to marry.

Superior Court Judge Mary Jacobson sided almost entirely with a group of same-sex couples and gay rights groups who sued the state in July, days after the U.S. Supreme Court struck down key parts of a law that blocked the federal government from granting benefits to gay couples. Gov. Chris Christie, a Republican in the midst of a re-election campaign and a possible presidential contender, said through a spokesman Friday that he plans to appeal the decision, which he believes should be determined by a popular vote rather than a court.

Jacobson made the ruling effective Oct. 21, giving Christie time to appeal and likely ask a court to delay implementation of her order. “Gov. Christie has always maintained that he would abide by the will of the voters on the issue of marriage equality and called for it to be on the ballot this Election Day,” spokesman Michael Drewniak said in a statement Friday. “Since the legislature refused to allow the people to decide expeditiously, we will let the Supreme Court make this constitutional determination.”

“We’ve won a great ruling today, and there is no turning back,” said Troy Stevenson, Executive Director of Garden State Equality. “Garden State Equality was proud to help initiate this historic case. We have long been leading the charge for equality, and we will continue to pursue every avenue to make sure New Jersey’s same-sex couples enjoy the dignity of marriage as quickly as possible.”

“Eleven years ago, when we asked Lambda Legal to work on our behalf, we were prepared for a long, hard road for our family and for other same-sex couples and their kids,” said Cindy Meneghin, plaintiff in the lawsuit along with her high school sweetheart, Maureen Kilian, and their two children. “The U.S. Supreme Court decision striking down DOMA was historic for the nation but out of reach for us here in New Jersey. Today, with this ruling, the full benefits of that historic Supreme Court decision are within our reach, and we couldn’t be happier.”