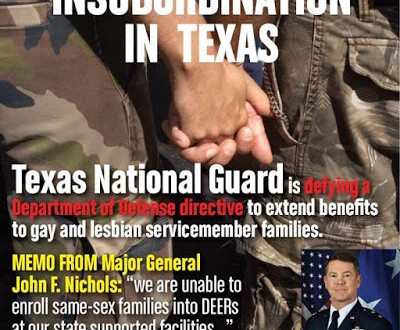 The DoD will begin extending spouse and family benefits, such as identification cards, to same-sex spouses. Enrollment into the Defense Enrollment Eligibility Reporting System (DEERS) will begin on 3 September 2013 The TXMF is a state agency under the authority and direction of the Texas state government. Therefore, the TXMF must consider that the Texas Constitution and Texas Family Code 6.204 conflicts with the DoD policy extending benefits to same-sex spouses. Due to this potential conflict, we are unable to enroll same-sex families into DEERs at our state supported facilities until we receive legal clarification.

UPDATE: Over on Twitter, Josh Barro wonders if this is just a procedural issue and prods me to post more from the memo in which Nichols directs same-sex spouses to visit a nearby federal base to enroll. The below list is from an internal memo addressed to “All TXMF Members” and the bases are not cited at the above link.

UPDATE II: The Washington Blade has more on the story.

Alicia Butler, an Austin, Texas, attorney, said she was rejected when she tried to register with the Defense Enrollment Eligibility Reporting System, or DEERS, the military’s health benefits system, when she applied on Tuesday at Camp Mabry, where her spouse, Judith Chedville, a nurse and Iraq war veteran, is stationed as a member of the National Guard. “We were told that Texas would not register us into the system and would not issue an ID card for me,” Butler said. “We were told that if she was active duty they would do that for me, but not for a National Guard member because she’s part of the Texas National Guard.”