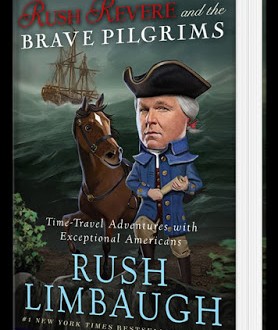 Limbaugh Has Written A Children’s Book

Rush Limbaugh has written a children’s book that he says will correct the American history being taught in public schools by godless communists. Via World Net Daily:

Called “Rush Revere and the Brave Pilgrims: Time-Travel Adventures with Exceptional Americans,” the book is designed for young people, but Limbaugh stressed it will appeal to patriotic Americans of all ages. “For twenty years, people have been urging me to write a new book,” Rush Limbaugh said at the top of his radio show on Thursday afternoon. The book tells the story of the radio host’s alter ego, a middle-school history teacher named Rush Revere, who travels back in time and experiences American history as it happens, in adventures with exceptional Americans. In this book, he is transported back in time, with his talking horse “Liberty,” to the deck of the Mayflower. Limbaugh’s “True Story of Thanksgiving” has been a long time annual staple on his radio show; “Rush Revere and the Brave Pilgrims” will expand on that stirring tale.

So what’s the “true story of the Pilgrims”?