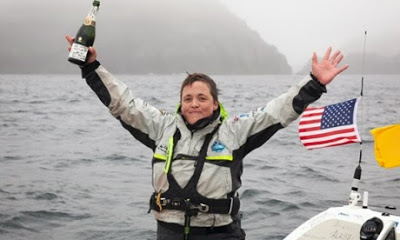 Out British athlete Sarah Outen yesterday completed a 150-day solo row from Japan to Alaska, becoming the first woman to do so. And along the way, she got engaged.

“I have had some of the most intense and memorable months of my life out on the Pacific. It has been brilliant and brutal at the same time,” Outen said in a statement. “And it has been a privilege.” Outen celebrated with a bottle of champagne in Adak, Alaska, and greeted locals and supporters, her first human contact in nearly five months, as first reported by the Anchorage Daily News. She left Choshi, in Japan, on 27 April and travelled 3,750 miles at sea. It is part of her plan for a global trek by ocean rowing shell, kayak and bike. “I have pushed myself to my absolute limits both physically and mentally to make land here in Alaska, and body and mind are now exhausted,” she said. Along the way, she also got engaged to her longtime girlfriend during a satellite phone call from the middle of the ocean. She had initially wanted to row from Japan to Canada, but the punishing weather caused a change of course to Alaska.

In 2009 Outen became the first woman to row alone across the Indian Ocean.