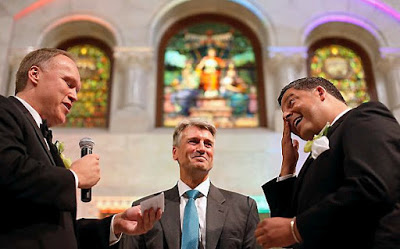 LAUNCHED: “Marry Me In Minneapolis”

Minneapolis Mayor R.T. Rybak, seen above officiating at Minnesota’s first same-sex wedding, is in Chicago today to launch “Marry Me In Minneapolis,” a campaign that invites Illinoisans to visit his city for their gay marriages.

Rybak’s message is that Chicagoans no longer have to make a long and expensive trip to the coasts to get married, just the six-hour drive to his city. Many Midwestern gay couples have exchanged vows in Iowa — the only state bordering Illinois that allows same-sex weddings — but Rybak hopes to bring some of that business home with him. “I love Chicago and love to come spend money there, but if people there don’t get the rights they deserve, I am more than happy to have them come and spend their money in Minneapolis,” he said in a telephone interview before the trip. Rybak figures the campaign, if successful, could help Minneapolis profit on everything from hotel rooms to flowers to caterers. He said he expects the effort to bring in at least tens of thousands and possibly hundreds of thousands of dollars.

It’s a wonderful campaign, but let’s hope the need it fills is short-lived. (Tipped by JMG reader David)

Previous BRITAIN: Gay Group Nominates Lively & Robertson For 2013 Bigot Of The Year
Next Half Of The US Lives In These Counties