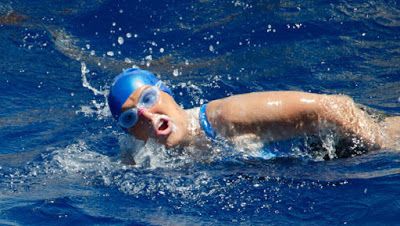 Openly lesbian marathon swimmer Diana Nyad, 64, has just finished her swim from Cuba to Key West. Hundreds of people cheered Nyad’s arrival as some in the crowd waved rainbow flags.

Endurance swimmer Diana Nyad became the first person to swim the treacherous waters from Cuba to Florida without a shark cage on Monday, arriving in Key West two days after starting her 110-mile trek. Nyad, 64, unsuccessfully tried to swim the Florida Strait four times, mostly recently in 2012. The New York City native’s latest journey began Saturday morning when she jumped from the seawall of the Hemingway Marina into the warm waters off Havana. As she closed in on the Key West shores, a couple of hundred people gathered on the beach to watch her make the final leg of the swim.

Nyad’s first notable swim came in 1975 when she swam the 28 miles around Manhattan in under eight hours.

UPDATE: The Tea Things are very upset that Hillary Clinton has congratulated Nyad and has “remained silent on Syria.”

Previous Liberals Are Twerking America
Next Headline Of The Day