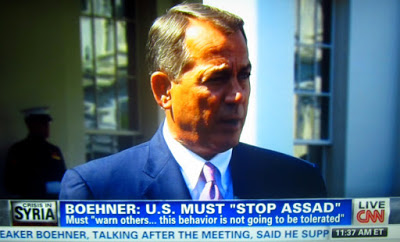 Pelosi echoed Boehner’s support, saying that she associates herself with Boehner’s remarks. Her support will also be important in potentially swaying Democrats not normally supportive of military action. “President Obama did not draw the red line. Humanity drew it,” Pelosi said. In his statement, Cantor suggested that a failure to respond to Assad’s use of chemical weapons could have broader implications for U.S. interests throughout the region. “It is not just an abstract theory that the Syrian conflict threatens the stability of key American partners in the region. It is a reality,” Cantor said.