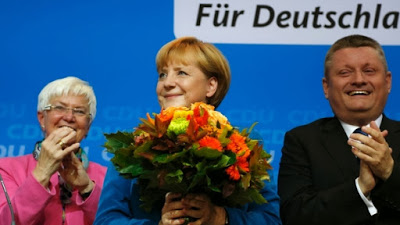 German Chancellor Angela Merkel has been reelected to a third term.

Her conservative bloc took about 41.5% of the vote – but her liberal partners failed to make it into parliament. It is thought she is likely to seek a grand coalition with the Social Democrats (SPD) who won 26%. The results showed that the liberal Free Democrats (FDP) won only 4.8%, which correspondents say is a disaster for the junior coalition partner, leaving it with no national representation in parliament for the first time in Germany’s post-war history. Party chairman Philipp Roesler called it “the bitterest, saddest hour of the Free Democratic Party”. The FDP was beaten by the Green Party (8.4%) and the former communist Left Party (8.6%). It almost finished behind the new Alternative fuer Deutschland (AfD), which advocates withdrawal from the euro currency and took 4.7%, just short of the parliamentary threshold.

Merkel opposes same-sex marriage and her reelection does not bode well for advances on the issue.