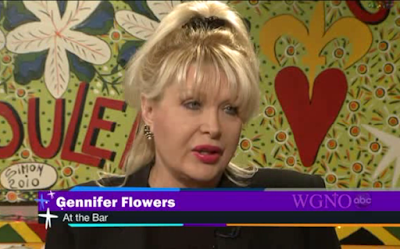 “We have some unresolved issues that it would be nice to sit down and talk about now. He was the love of my life and I was the love of his life and you don’t get over those things. If we had the opportunity to sit down and visit with each other in person, I’m not saying the romance would be rekindled but we will always have something. Whatever you might call it. Bill and I would be together today if it wasn’t for politics. It was me, Bill and Hillary. Then they had Chelsea and the stakes got too high. I don’t know Huma or the Weiners. I just know what Bill told me and that was that he was aware that Hillary was bisexual and he didn’t care. He should know. He said Hillary had eaten more pussy than he had.” – Gennifer Flowers, who has crawled out from under a rock to promote (surprise!) her new gig as a sex advice columnist for Penthouse. The second headline is from Wonkette‘s hilarious piece.