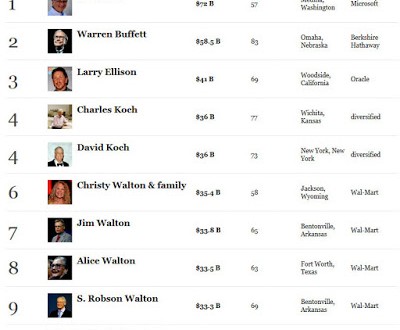 The combined wealth of the Forbes’ 2013 ranking of the richest people in America is $2 trillion, up from $1.7 trillion in 2012 and the highest ever, due in part to the strength of both the U.S. stock and real estate markets. The average net worth of a Forbes 400 member is a staggering $5 billion, the highest to date, up from $4.2 billion last year. Bill Gates retains the top spot on the Forbes 400 for the twentieth straight year, at $72 billion. Up $6 billion from 2012, Mr. Gates is once again the world’s richest person, having passed Mexico’s Carlos Slim in May. Warren Buffett, #2, is the biggest dollar gainer this year at $58.5 billion, up $12.5 billion from last year. Larry Ellison (#3), worth $41 billion, is the same as last year; he is the only one in the Top 10 who did not add to his fortune. Mark Zuckerberg was the second biggest gainer at $9.6 billion. He returns to the Top 20 (#20) at $19 billion after dropping to #36 last year, while Carl Icahn is back in the Top 20 (#18) for the first time since 2008.

NYC Mayor Michael Bloomberg’s wealth increased by $6B just this year. Another interesting note: “There are 48 women on the list, including retired Army lieutenant colonel and heir to the Hyatt Hotels fortune Jennifer Pritzker (#327), formerly known as James Pritzker and the first transgender billionaire.” Homocon PayPal co-founder Peter Thiel ranks at #314 with $1.6B.

Previous From Madonna’s “Ask Me Anything”
Next CBN Reporter: Leftists Hate America So Much, They Support Islamic Sharia Law