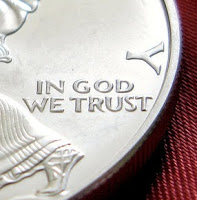 A federal judge has dismissed a lawsuit that sought to remove “In God We Trust” from US currency.

Judge Harold Baer Jr. of the Southern District of New York ruled Monday that a suit brought by the Freedom From Religion Foundation and others should be dismissed. “The Supreme Court has repeatedly assumed the motto’s secular purpose and effect, and all circuit courts that have considered this issue-namely the Ninth, Fifth, Tenth, and D.C. Circuit- have found no constitutional violation in the motto’s inclusion on currency,” wrote Baer. “Each circuit court that has considered the issue found no Establishment Clause violation in the motto’s placement on currency, finding ceremonial or secular purposes and no religious effect or endorsement.” American Center for Law and Justice, a conservative legal group, filed an amicus brief in support of the motto on behalf of 41 members of Congress and approximately 90,000 Americans who wanted a dismissal.

Previous Anita Bryant: The Devil Tried To Kill Me
Next Quote Of The Day – Phyllis Schlafly