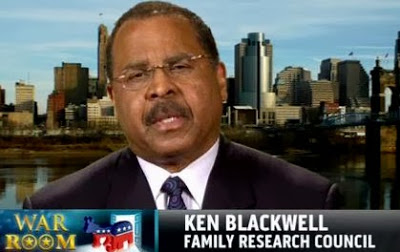 Family Research Council: There Is Nothing More Christian Than Cutting Food Stamps

“I think through empowering others and creating self-sufficiency…there within lies the path to sense of worthiness,” Blackwell told CP. “When I was growing up, there was fundamental belief, that there were times in people’s life when they needed a hand up…there were temporariness to hose programs, where they were structured so that they didn’t breed so that they didn’t breed dependency.” Blackwell also suggested that there was “nothing more Christian” than “not locking people into a permanent dependency on government handouts, but making sure they are participants in their own upliftment and empowerment so that they in fact through the dignity of work and can break from the plantation of big government.”

Last week the House approved a bill that cuts the food stamp program by $39B over the next ten years. Every Democrat voted against it.