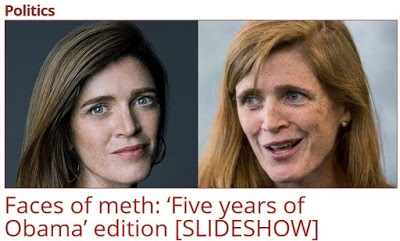 Teabagistan’s always classy and erudite Daily Caller (owned by Tucker Carlson) today published a before-and-after slideshow of prominent Democrats with the above headline.

Back in 2008 it was fun. Daring. Exciting. The rush was unbelievable. The visuals? Man, this dope is like the best parts of coke and acid. Plus all the cool kids were doing it, but, like, for real — not in a cliche way, ya know? Young guys and pretty girls from Silicon Valley. All the actors and stuff. Hell, it even made old fogies like Kerry and Reid feel young. We all remember how hard it was to convince Hillary to give it a try, but after she’d had a hit, man, it was like she was flying. Just untouchable. But things turned south quick. The high was fleeting. It just couldn’t take anyone to those soaring heights anymore. We were all left chasing the hit, never quite catching it.

According to Daily Caller, Jesse Jackson, Hillary Clinton, Harry Reid, John Kerry, and US Ambassador to the United Nations Samantha Power (above) all have meth-face after five years of Obama.

Previous Linda Harvey: GLSEN Is Pure Evil
Next Facebook Meme Of The Day