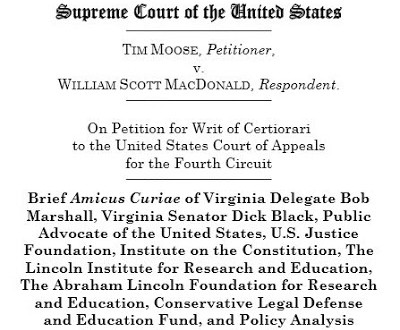 A coalition of crusty crackpots including Eugene Delgaudio and freakshow Virginia Del. Bob Marshall have filed a petition to the US Supreme Court demanding their reversal of a ruling by the Fourth Circuit Court of Appeals which upheld the legalization of sodomy. As you surely know, in 2003 the Supreme Court overturned all statewide bans on sodomy in their landmark ruling, Lawrence Vs. Texas. Virginia Attorney General Ken Cuccinelli (who is running for governor), has filed his own SCOTUS petition on the Virginia case, which involved a man who was charged under the now totally illegal sodomy statute because he solicited oral sex from a 17 year-old girl.

Public Advocate is taking legal action in Virginia to defend children from a dangerous court decision. They chose to apply an unrelated decision in Texas to justify their agenda of social “progress.”  The Texas case, Lawrence v. Texas, struck down a similar anti-sodomy law. However, it was never intended to be binding on any other state. The worst part, MacDonald v. Moose should have been an open and shut case. William MacDonald was convicted of demanding a 17-year-old girl perform an unnatural sex act upon him. And his appeal presented nothing to deny this.
However, his lawyers argued — and the Fourth Circuit agreed — that it was unfair to criminalize his actions, since it involved sexual acts defended by the Homosexual Lobby. That is the heart of this matter. The Homosexual Lobby is desperately trying to normalize their abnormal behavior in the eyes of the American people. MacDonald v. Moose was just the latest attack.

Obviously, this is an attempt to overturn Lawrence itself as the Supreme Court could not allow sodomy bans in only one state.  Read the full SCOTUS petition.

PREVIOUSLY ON JMG: In 2011 Del. Bob Marshall claimed it is a felony for a state office to fly the rainbow flag. Marshall has also called on Virginia to issue its own currency, and has claimed that God punishes women who have abortions by giving them deformed children. After the DADT repeal bill passed, Marshall tried to have gays banned from the Virginia National Guard.  More recently, Marshall attempted to block the appointment of an openly gay state judge because the nominee has “an illegal husband.”