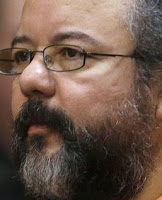 One month after he was sentenced to more than 1000 years in prison, notorious Cleveland kidnapper Ariel Castro has hanged himself in his cell.

Castro, 53, was in a cell by himself in protective custody at the Correction Reception Center in Orient, Ohio, wrote JoEllen Smith with the state corrections agency. Castro was found at 9:20 p.m. ET in the cell, where checks are required every 30 minutes, Smith wrote in the email. After prison medical staff attempted lifesaving measures, Castro was transported to The Ohio State University Wexner Medical Center and pronounced dead at 10:52 p.m. ET, Smith wrote.